My name is Ara Sadoyan, I’m the founder of OddEye monitoring and anomaly detection platform. Beside our platform, we also provide DevOps as a service to our most valuable clients. Here I want to share some information about one of our great friends and partners Mouseflow and their infrastructure hosted at LeaseWeb.

A little background about the project. Over 500 Linux and Windows servers at two data centers. Most applications are in .NET, with less than 10 services, some of which are super loaded some are not, HBase is the main database, ElasticSearch store series, we use Ansible to deploy servers and of course OddEye for monitoring.

We are using TeamCity to build and MSDeploy to deploy our .NET applications on Windows servers. Usually, deployment takes less than 10 minutes, of course during this procedure service remains online with zero downtime.

So the tasks are simple:

Lots of people will say that the only, or at least the most optimal solution to achieve these goals is to deploy dockers, orchestrate it with Kubernetes, or at least go to AWS and order tons of cloud instances. But one of our tasks is “Maximum performance”. This means that we must be as close as possible to hardware so cloud instances with noisy neighbors is not an option for us. Containers are probably the most performant way to virtualize environments, but every abstraction is loss of performance, maybe just a little, but it is. Also neither Hadoop/HBase nor ElasticSearch, which are our main services, play well with containers. So the only solution left is to work with metal boxes.

So how to manage this monster? Do we need a team of engineers, DevOps and several managers to keep track of everything, solution architects, etc…? No we don’t. 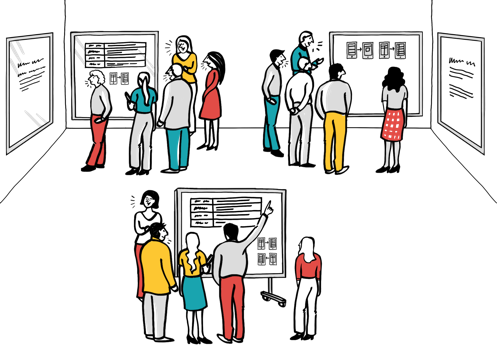 We do not want to spend many hundreds of man hours and keep lots of people in a team to manage these servers, we need to do this in an effective way with a small team. So how to achieve that? The thing is that lots of people forget about battle tested old tools, and forget that most of these tools are in use by the biggest players. So the decision was made: we are moving forward with Metal Boxes. For that we need reliable data center which provides good servers with reasonable prices at US and EU. After short research we choose to work with LeaseWeb.

There is a small task for the local personal of datacenter: they should deliver servers with defined by us settings for KVM, so we can have offline access to servers when things goes bad and somehow we lose contact with OS over SSH. We ordered an initial amount of racks and servers and started configuring our system. First thing was to create a TFTP server with install images which should have some basic configurations and SSH keys. When that was done, we could boot the machine via PXE and automatically install the OS on it.

The procedure of delivery of servers is the following:

When the basic OS is installed and configured we need to deploy software and services. Most of our servers are running HDFS/HBase or ElasticSearch. So the task is to automate the installation and configuration process. It did not take a long time for us to choose Ansible as the preferred automation tool. The reason for choosing Ansible was obvious: Ansible relies on SSH and doesn’t require any agent installation at the target systems. As we install SSH keys during OS installation nothing else left to do at the end machines in order to use them as Ansible clients. We have installed Ansible on the head machine and created several playbooks to automate HDFS/HBase and ElasticSearch installations.

As I have mentioned above many of our applications are running on .NET on Windows so our development team is using MSDeploy to handle correct deployment of applications. When we switch to .NET core on Linux , which is on our roadmap, we will make several Ansible playbooks for that as well.

My message isn’t new: Choose the right tool for the right task, what is trending may not be the best fit for your case. And of course it is definitely possible to manage a metal monster with a micro team

I also suggest you read this article :

GET THE LATEST UPDATES

"As a humanitarian organization, we want to know how information reaches our target audience. Mouseflow supports us by providing actionable, valuable, and real-time intelligence as we work with the people who depend on our information." “Mouseflow makes it easy to get data without having to be a JavaScript expert. Their customer support has helped me every step of the way — from setting up surveys to figuring out how best to analyze results. I recommend Mouseflow to anyone looking to quantify engagement and behavior online!” "For user experience, Mouseflow's session replay and heatmaps are the perfect complement to our analysis. It helps different departments gather insights quickly and effectively. It is absolutely essential for optimizing our sites." "You learn more about users in a week than months of typical U/X testing. Do yourself a favor and start using Mouseflow!"

“Mouseflow offers us the capability to look into key journeys through the eyes of users. We uncovered handfuls of bugs and previously unknown pain points. We also gathered satisfaction metrics from critical parts of our website. Mouseflow is, without doubt, the best UX service I have used to date and very much a credit to the team who make it all happen!” “Mouseflow is a great platform to track customer behavior. The funnels are my favorite feature for improving conversions. I also like using forms to isolate issues with specific form fields. It definitely helps the team out!” “We use Mouseflow to improve customer experiences and journeys. It takes the guesswork out of developing a website and enables us to fix problems quickly. It's the best tool because it enables us to be agile and reactive to user experiences.” “Mouseflow is a good addition to the other analytical tools we use and a good alternative to similar offers. Compared to eye-tracking studies, Mouseflow is faster, cheaper, and much easier to apply to multiple analytical cases. Compared to other session replay tools, Mouseflow does everything we need without the feature bloat and higher costs. And Mouseflow’s customer support is always on time and on target.”